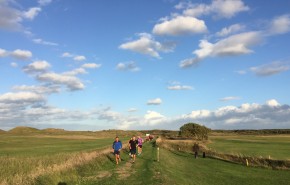 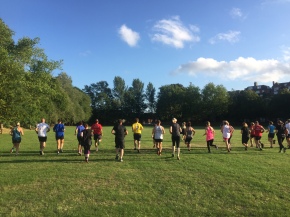 Being injured always sucks. But I can’t help feeling it’s even harder when you’re a coach, because you feel as though you should be immune. Surely, if you know so much about running, you never make training errors or run with anything other than textbook-perfect form? Ha ha. We’re only human, of course. Our bodies are no more machines than are those of our clients. But it does shake your confidence when you can’t do the very thing that you’re teaching and supporting others to do.

When I recommenced running after a week’s recovery post-Brighton marathon, my right knee started to niggle, getting progressively worse over the course of the week to the point where even walking was painful. It was frustrating – I’d been seized by that ‘just let off the leash’ feeling after the discipline of marathon training, and was looking forward to pottering through the woods and tearing up the track in equal measure.  But there I was, grounded.

One thing I could do as a coach, however, was be a good role model and act how I would advise others to in my situation. OK, I’ll admit it took me a week to get my head around this, but after a flurry of ‘panic’ activities (including a course of anti-inflammatories, a knee brace, regular applications of ice) I stopped running completely, endeavoured to avoid anything that irritated it (which turned out to include both cycling or swimming) and waited for my body to do its healing thing. Oh, and I went to see a physio.

While logic suggested that my knee was ‘a bit angry’ after the rigours of the marathon and wasn’t ready to get back to the day job yet, the less-rational side of my brain was conjuring up serious issues like worn cartilage, ligament damage or tendinopathy that would put me out of action for months or even spell the end of my running career. With such a powerful psychological component to pain (and studies showing that stressing about pain actually makes it feel worse), it was really important to me to have a professional assessment. Being able to rule out these more sinister possibilities was enough to put my mind at rest and allow me to focus on building strength in my quads and glutes while it settled.

“Try not to ‘helicopter parent’ your injured part too much”

It now has, and I’m gradually building up my running again. For anyone else returning from injury, I’d recommend trying not to ‘helicopter parent’ your injured part too much. After having suffered some pain there, you are going to be super-sensitive for a while and even the tiniest twinge can be magnified in your mind. Sure, don’t ignore pain, but ask yourself how you’d score it on a scale of 1 to 5. If it’s a 1 or 2, you’re probably fine to carry on.  I’ve found that smiling – and looking at the scenery – helps keep me distracted from worrying about it too much.

During my ‘off’ time, I took the opportunity to read up and refresh my knowledge on strength and conditioning and gait retraining and I’ve learned some useful new stuff, which I’ll be weaving into my Run Better workshop. You could call that a silver lining, but I’m far too cautious for that!

Thanks, Brighton Marathon. I came, I’m sore and I conquered!

Well thanks, Brighton Marathon. I came, I’m sore and I sort-of conquered. Not the time I was hoping to run when I mounted my marathon comeback in December, but given the lost month of training, I think that my finish time – 3.45.17 – was pretty much what I was capable of on the day. It places me comfortably inside the Good for Age category for London, should I consider putting myself through all this again, for marathon number 19!

So, Brighton, what did you have for us? A glorious morning of blue sky with air lightly chilled. A well-organised start. An interesting, lively course with enough runners to make it feel like a big race without congestion and bottlenecks. You had friendly marshals and fantastic crowds, with high fives, jelly babies and orange segments at the ready. Oh, and some great race signs! (Is that a gel in your pocket or are you just pleased to see me?) You had rousing drumming bands and storming DJs. And you didn’t have plastic bottles – all credit to you.

But, oh, you also gave us a stiff breeze along that seafront! Manageable on the initial eastward stretch, but by the time it came to those last four miles, I was practically weeping. And, I have to say, you dished out quite a few hills, too. I logged 665 feet of ascent! Barely worth mentioning in a gnarly trail race, but you certainly feel them in a marathon.

The overall verdict? You did yourself proud. I almost – but not quite – did the same.

Doing next-to-nothing is harder than it looks…

It’s less than 72 hours until race morning! The trepidation has been building steadily, in the face of the great unknown that awaits on Sunday. Will I be able to sustain my goal pace? Will the wind on the Brighton seafront scupper my plans? Will my stomach behave? Will an old injury rear its ugly head, or a new one emerge? Will I hit the wall? The weird thing about the marathon is that these questions are no more answerable on your 5th or 15th marathon than they were ahead of your first. When you’re out there for three hours or more, elements of chance and luck come into play…

Following a race build-up with more ups and downs than a Garmin heart rate profile, I’ve adjusted my finish time goal by 10 minutes – and shortened my taper to two weeks. (The less you’ve done, the less you need to recover from.)  But it’s harder than it looks, this taper caper. As a coach, I know that it takes around 14 days for the adaptations resulting from a specific workout to assimilate. Therefore, there’s little point doing anything beyond then to try to ‘get fitter’ for marathon day. But that doesn’t stop many runners trying (to the detriment of their race-day performance).

The aim is to hold on to what you’ve got – not just in terms of aerobic fitness but ‘neuromuscular’ fitness too: this refers to the efficiency of the communication pathways between the nervous system and the muscles, which plays a role in important things like running economy, muscle recruitment and sense of effort. Most experts recommend that you drop volume significantly during the taper, but maintain a degree of intensity. For example, if you were doing a speed session, you wouldn’t skip it altogether, but you might only do a half or a quarter of what you were doing pre-taper.

Less volume means more time on your hands. More time to stress over whether you’ve done enough mileage, whether that’s a cold you’ve got coming, or whether your knee is feeling slightly niggly… No wonder so many of us fall into the trap of doing things we don’t normally do to fill in the spare hours. Take Tuesday. I was having a rest day, but I found myself thinking ‘I know, I’ll do half an hour of drills, to keep my neuromuscular pathways firing.’ I almost did, but remembered the golden rule of marathon week just in time. DON’T TRY ANYTHING NEW OR UNFAMILIAR! That goes for shoes, stretches, gels, massage tools and yes, drills. And then today, when wheeling the just-emptied garden bin round to the back garden, I almost got to work chopping up the pile of branches we cut down the other weekend. Step inside, Sam Murphy, I ordered myself.

How to fill taper time, then? Well, there’s your feet to sort out. Cut toenails short and straight across, file away any hard ridges of skin and moisturise. Check – and recheck – your race instructions. Pack – and repack – your bag. (My book Marathon and Half Marathon From Start to Finish has a handy packing checklist.) Tell your supporters and spectators where you want them to be around the course and roughly what time to expect you. And, if you haven’t already done so, write your name on the front of your top in thick, black marker pen. Then it’s just a matter of putting your feet up and working your way through all those lovely carbs…