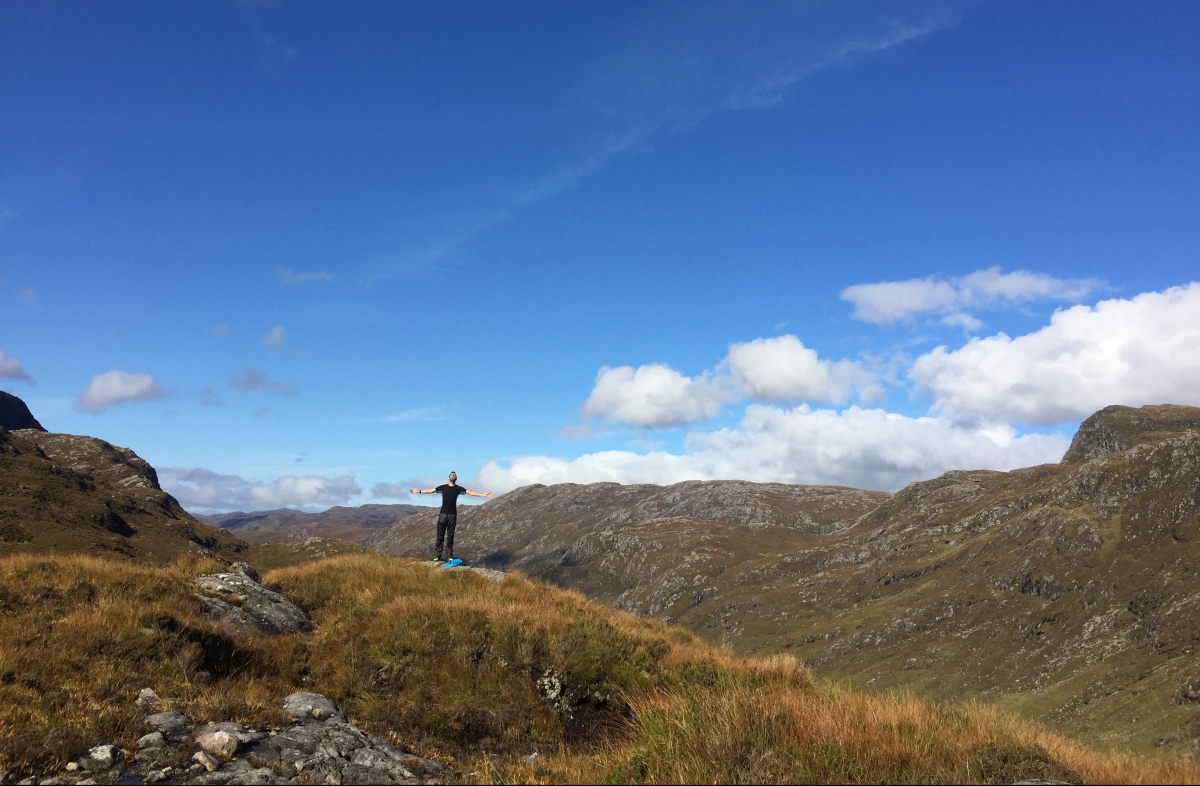 We cannot resist a rest day at Inchnadamph – what with luxuries like fresh milk, wifi,  a washing machine, drying room and bath on offer (even Morris gets one). It’s well timed, because the following day we embark on what’s deemed to be ‘one of the hardest, but finest’ stages of the trail. It goes up almost immediately; not too sharply at first but then gradually getting steeper and tougher. Plenty of times, we think we’ve reached the top, only to find it’s just a lip on to a brief plateau, leading to the next false summit. But, oh, the views: an other-worldly 360-degree panorama of green-grey mountains and cobalt lochs with not a single shred of human presence. If a pterodactyl flew over, I don’t think I’d be all that surprised. 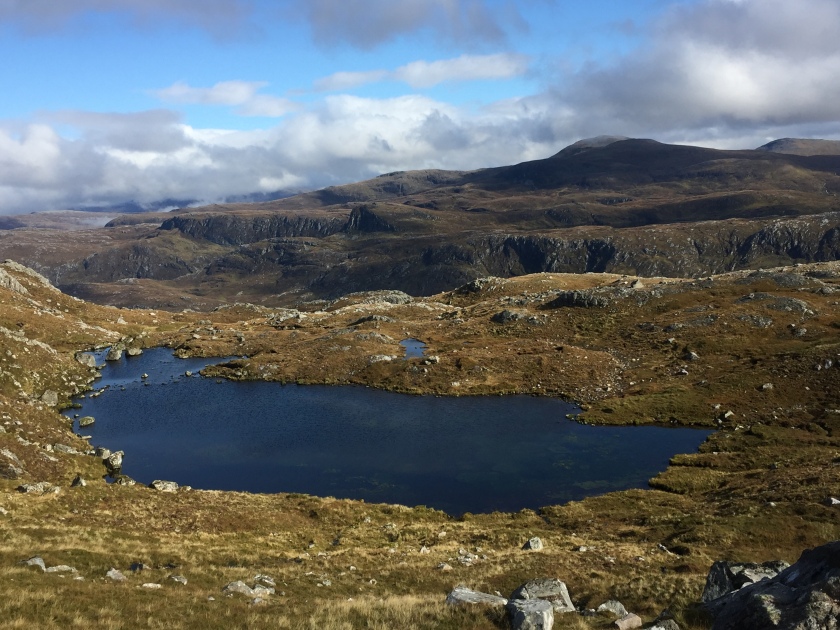 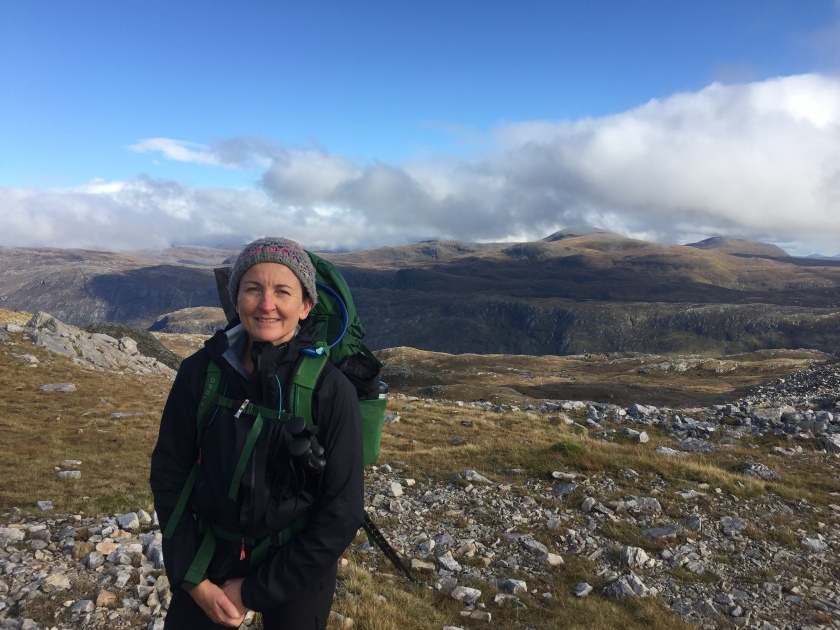 Once again, we’re heading for the ‘V’ of a mountain pass. This one sits at around 600m, between Benn Uidhe and Glas Bheinn and it takes well over two hours of relentless climbing to reach it. Then we have to come down – which I’ve been dreading – but this time, there are no steep drops or rock steps to negotiate. We zig-zag down on steep, rubbly terrain until we finally reach the river at the bottom of the glen, about 4km south of Glencoul bothy, where we are planning to spend the night.

Following the river north we pass the huge Eas a Chual Aluinn waterfall before reaching Loch Beag, a sea loch, where we spot seals lounging among the seaweed. 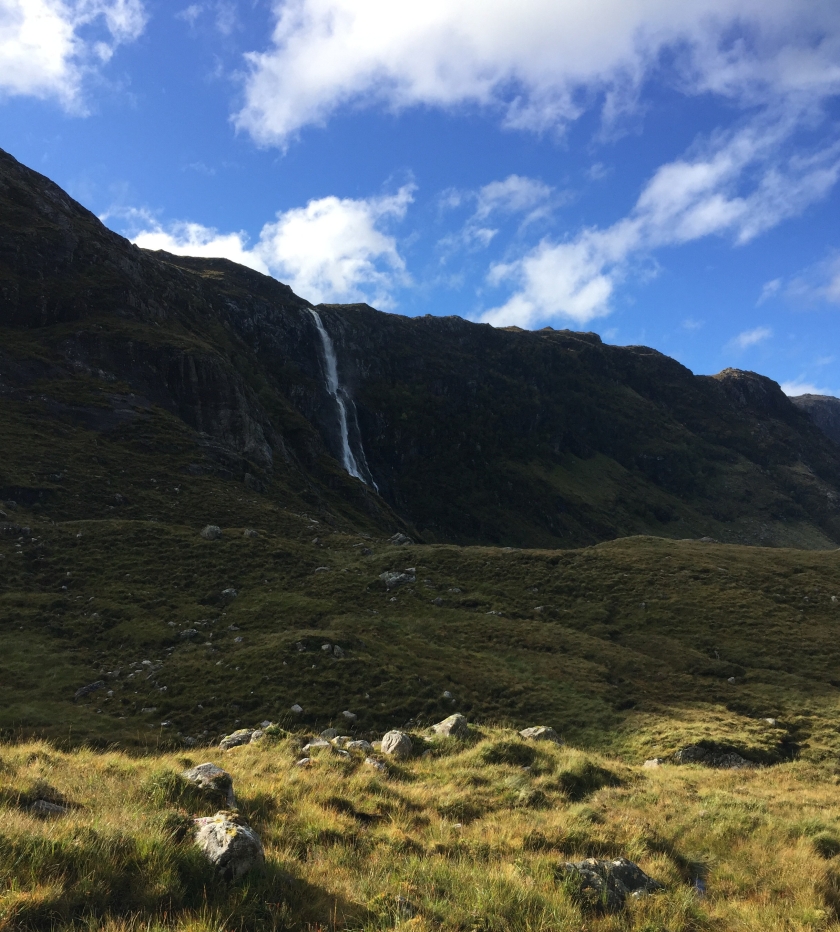 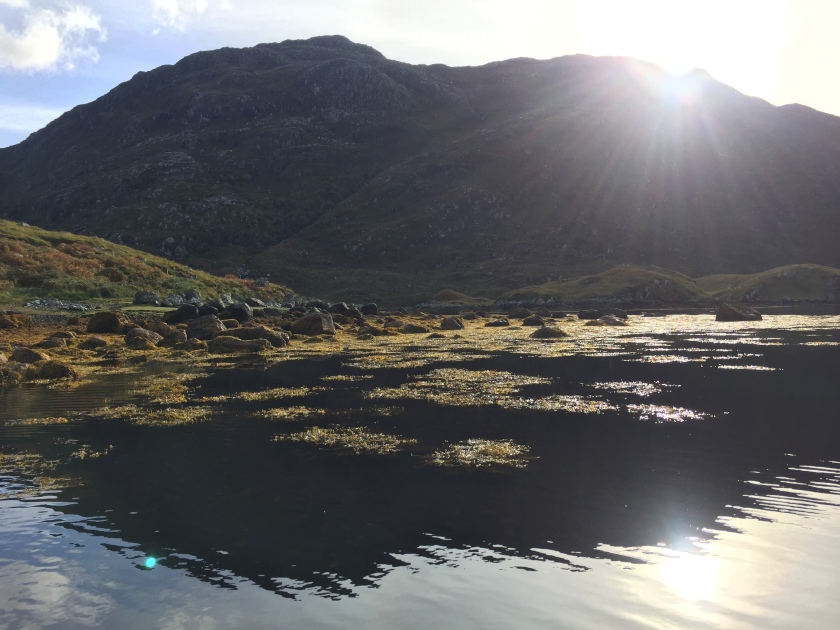 When we reach Glencoul, two men – Barry and Dave – are doing some repairs and maintenance work on the bothy, but they are happy to make room for us and even get us to help with the planting of a rowan tree in the garden. 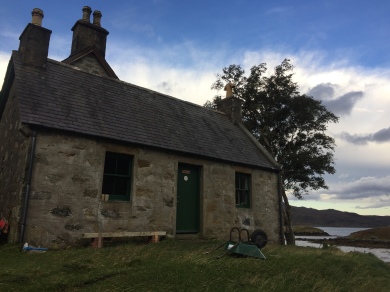 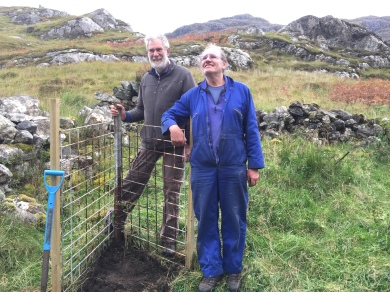 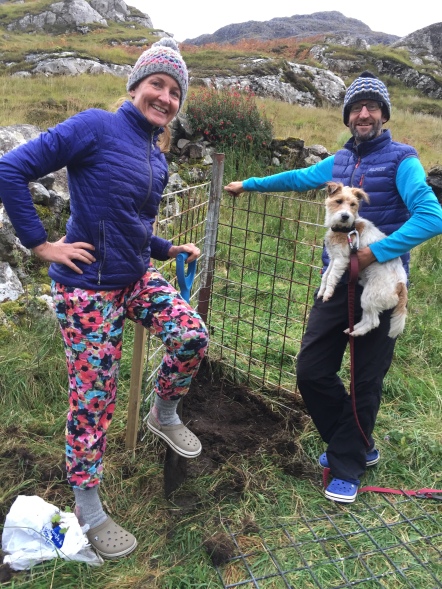 The bothy is one of the nicest we’ve seen – two rooms, one with a hearth, comfy chairs and bookshelves. Later, they get a fire roaring and we sit and chat over mugs of tea before retiring to our newly-constructed sleeping platform. It turns out that Barry has just had a book published about the human fascination with islands, so he’s excited to hear that we’re planning to go to Luing, one of the tiniest Hebridean islands, after we finish the CWT.

A vicious wind whips up during the night, hammering on the door and window frames. When we get up the next morning, we’re not sure whether our planned route up and around the Aird da Loch peninsula – jutting out over the sea loch like the prow of a ship – will be safe. We decide we’ll give it a try and retreat to the bothy if it gets too hairy. The path zig-zags up the hill and soon my heart is racing both from the climb and the drop below. It’s blowy, but it doesn’t feel windy enough to be hazardous. When we reach where the captain’s cabin would be on our giant prow, there’s a large boggy plateau strewn with boulders, where we stop for our first break. I feel especially tired today and seem to keep tripping over. Jeff says that every time I do, I spin round and give the offending rock or root a dirty look, which tickles him. He thinks it’s hilarious the next time he trips to turn around and shake his fist at the ground in mock anger.

After negotiating the plateau, we drop down the wooded slope on the far side of the prow on a narrow, slippy path. It’s a great relief to finally reach loch level and rest on the shore. 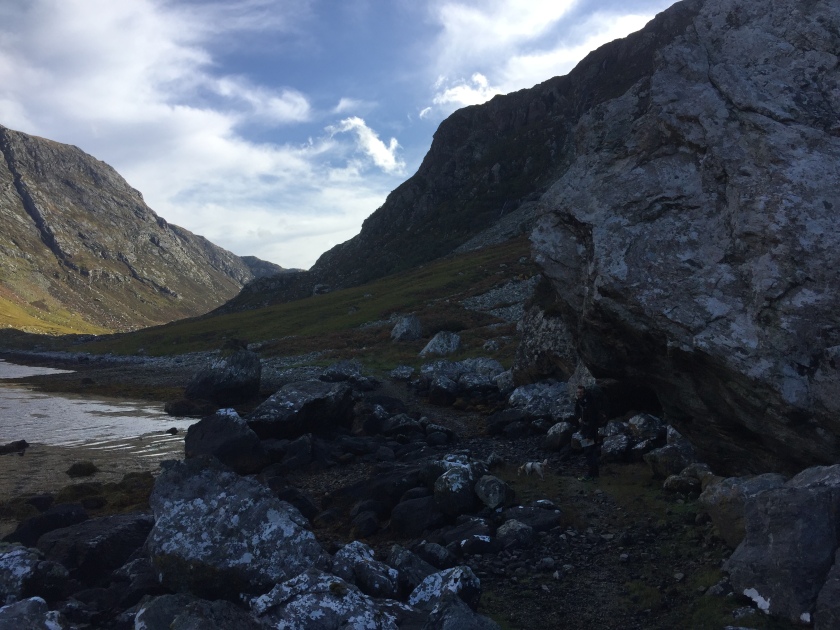 But we still have a lot of ground to cover so after extra sweet rations, we continue. When will I learn that ‘alongside the loch’ doesn’t necessarily mean that the path will be flat, like the water itself? We slog along the bank for a while – eyed by the occasional seal – and then, once again, find ourselves climbing. By the time we stop for lunch, I feel so whacked I have to have a lie-down before I can eat anything. Both the nap and the food help, which is just as well as we still have a long way to go. Fortunately, the dramatic scenery continues – pink granite cliffs, wind-sculpted trees and rocky promontories amid the hills and lochs. 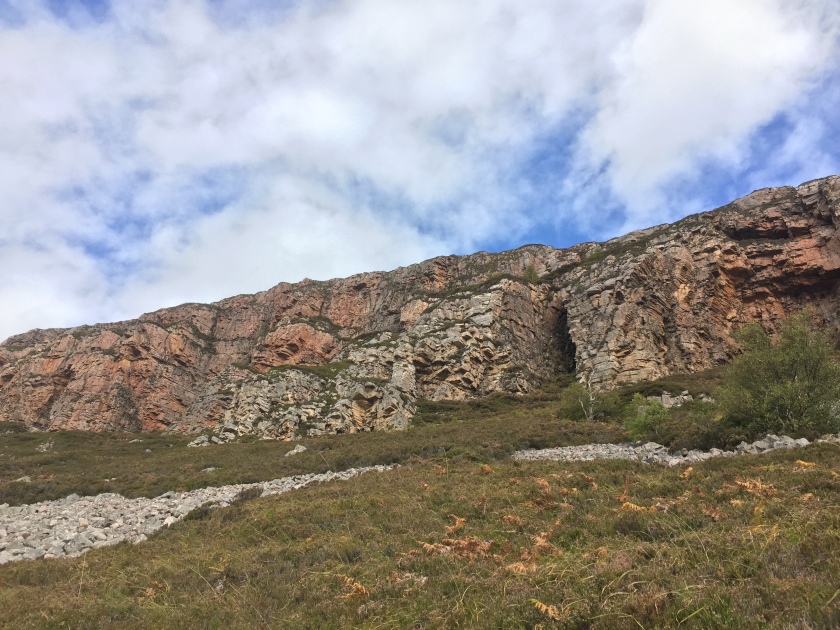 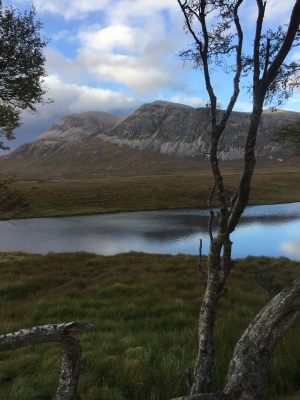 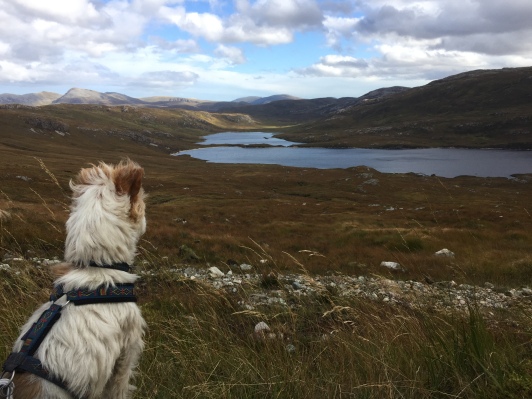 We stop to make coffee at an old shieling (shielings were temporary stone dwellings built on the hills for womenfolk to stay in while tending the cattle, brought up high for the better pasture. Apparently, the local men found many a ‘reason’ to drop by these houses full of young lasses…) 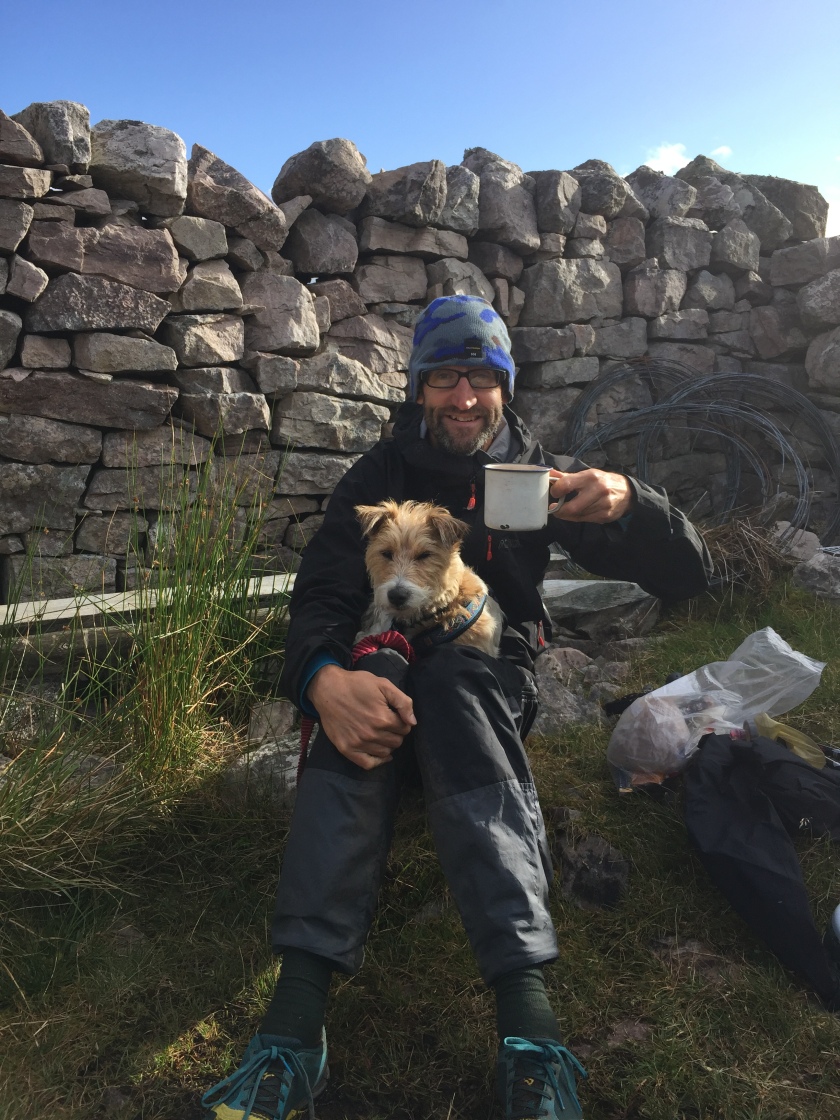 There is a route choice to make here – our mutual fatigue leads us to opt for the easier route to Loch Stack via Achfary, rather than up and over Ben Dreavie. As a result, the remainder of the day sees us on 4 x4 tracks and quiet roads, with the dark, cleaved peak of Ben Arkle looming in the distance. North of the hamlet of Achfary, a tweed-clad estate worker (this whole area is part of the Grosvenor Estate, owned by the Duke of Westminster) stops us to ask where we’re heading, as there is a deer-stalking party going out the next day on the slopes of Ben Arkle. He also recommends a camping spot a mile or so further on, which turns out to be one of our best yet; a level grassy pitch with mountain views, a tumbling river and roaring stags. Bundled up in our sleeping bags, we look at the map and it’s quite a shock to see how close we’re getting to the final push to the lighthouse. It’s exciting, of course, but I also feel a reluctance for the hike to end because I’ve come to love the rhythm of our days on the trail. I’m not quite ready for this chapter of The Crazy Thing to end yet… 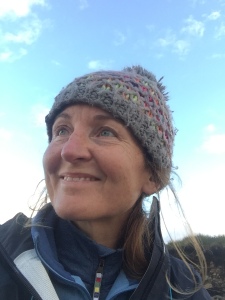