A two-day running adventure that retraces the footsteps of William the Conqueror through gorgeous Sussex countryside. 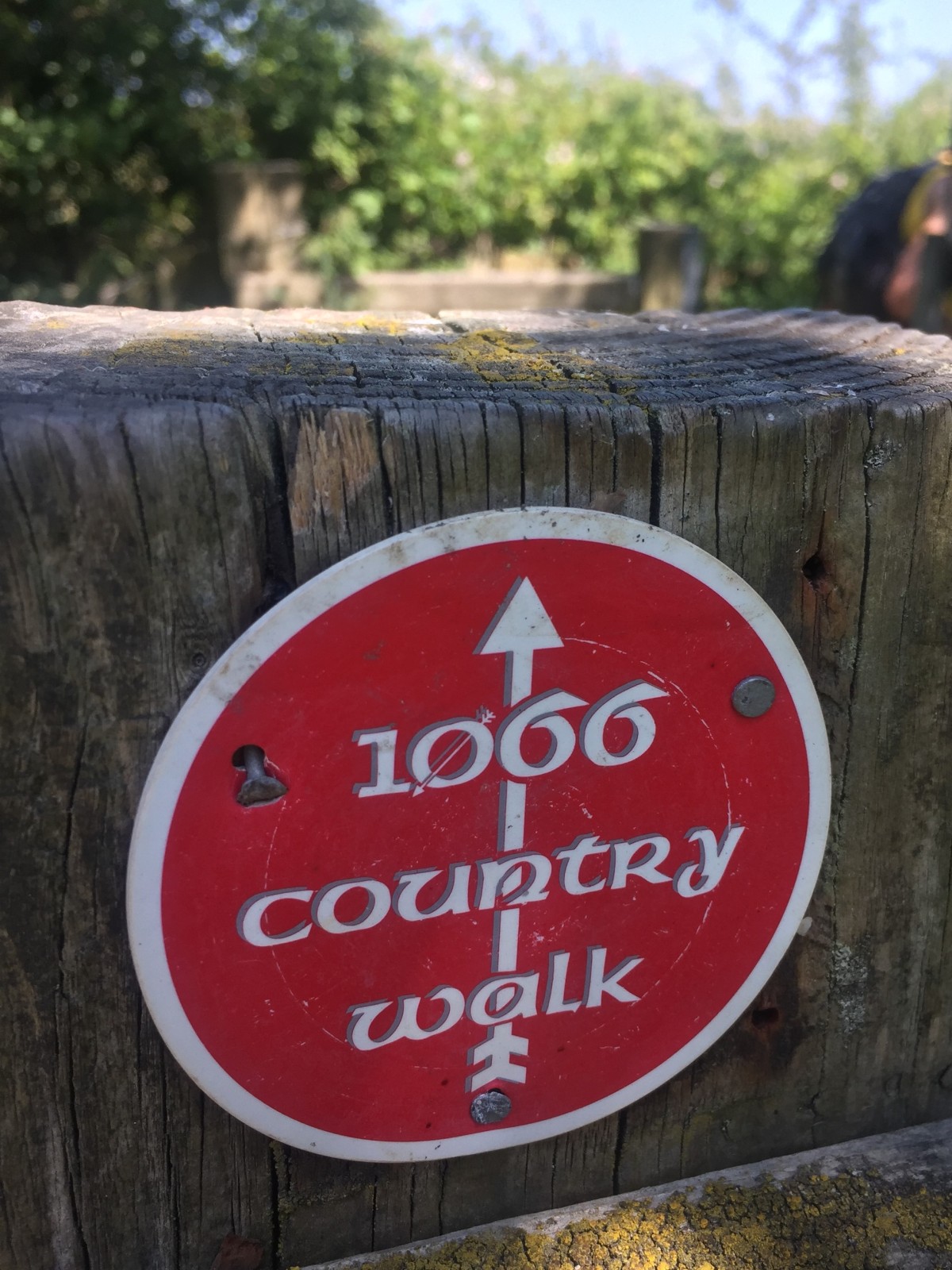 I can’t decide whether the glittering wings I’m watching spiral in a shaft of dappled light are those of butterflies or fairies. It’s been a long day – I’m hot, tired and somewhat dazzled by the sun that has shone mercilessly upon us every step of the way.  The fluttering creatures turn out to be common large whites, but the spectacle is none the less magical for it and provides a reason to linger in the cool refuge of this sunken lane, shaded by branches that almost join overhead to form a tunnel. 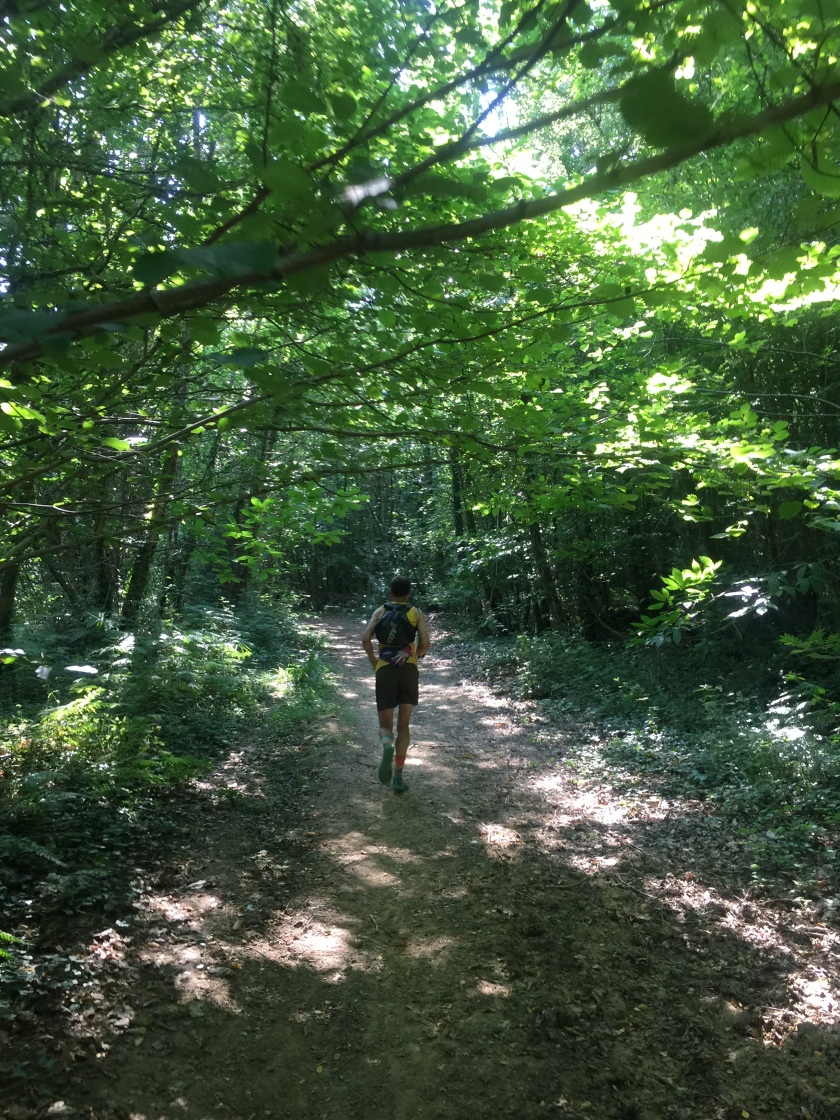 We’re somewhere between Herstmonceux and Battle, following the 1066 Country Walk, a 32-mile marked trail from Pevensey Castle to Rye. But we’re not walking, we’re running.

It’s a dry run (pun intended) for our forthcoming two-day running adventure – and so far, so good. Is the route runnable? Tick. Does it divide neatly into two days of manageable distance? Tick. Is the scenery suitably gorgeous and varied? Tick. 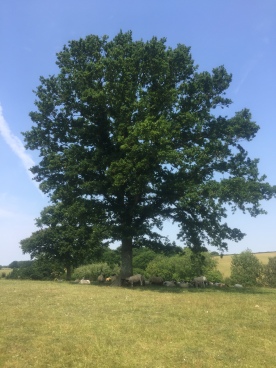 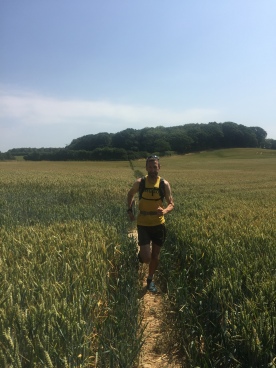 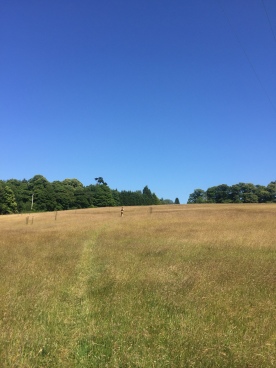 We pressed ‘start’ on our watches a few hours ago, as we passed through the eastern gate of the Roman wall that surrounds the picturesque ruins of medieval Pevensey castle.  Soon we’re striking out across the Pevensey Levels, an expanse of low-lying grassland and marsh that, as little as 700 years ago, was under water and is now considered an area of special scientific interest, thanks to its diversity of flora and fauna. The air is alive with lark song and the drowsy hum of bees as we follow the trail alongside waterways, through fields of beans and corn and meadows swaying with wild flowers. 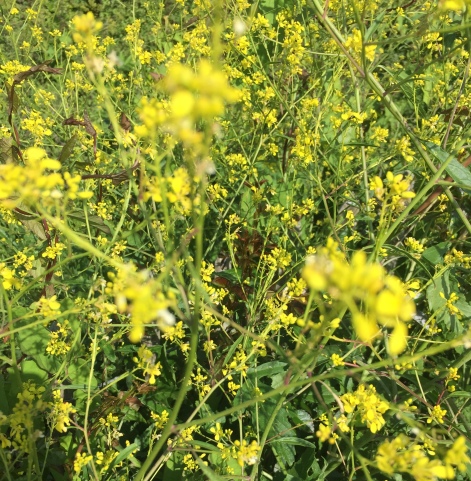 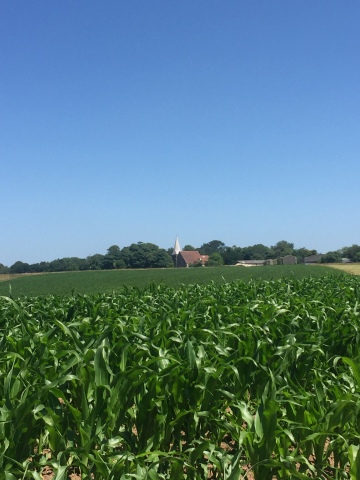 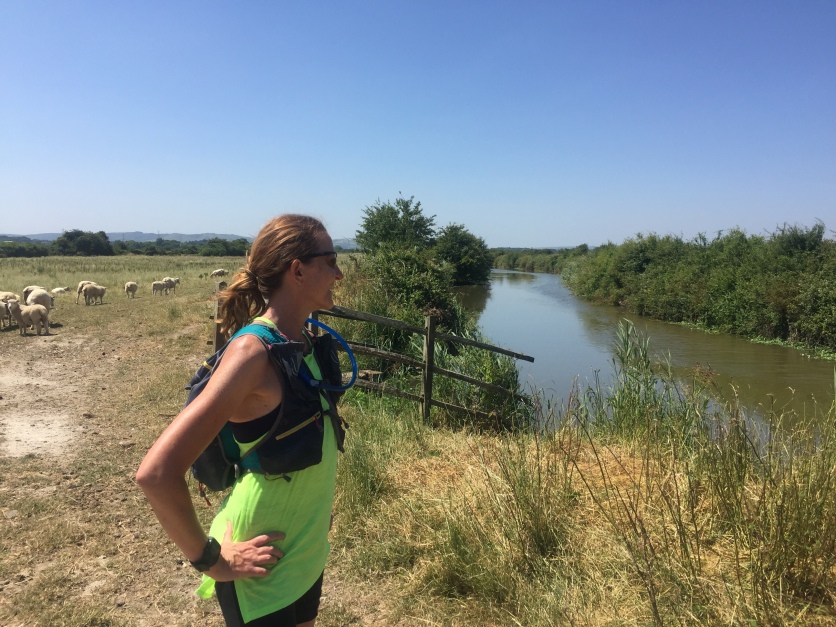 After a few miles of flat and easygoing terrain, we begin to climb, making a beeline for the distinctive shingled tower of All Saints Church, originally built in the late 12th century, where it served the residents of Herstmonceux, a medieval village, the modern version of which now sits two miles’ north. 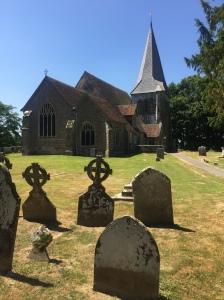 History is one thing that the 1066 trail offers in abundance. Yep, the clue is in the title – the route traces the footsteps made by William the Conqueror 952 years ago, after he landed on Pevensey’s shores from France and marched into what remains one of the most famous battles of all time.

Renowned it may be, but there’s disagreement about what actually happened at the Battle of Hastings. Not everyone goes along with the belief that King Harold took an arrow in the eye (how his death is depicted on the Bayeux Tapestry, as every school child will know), and while it’s well known that the battle did not take place in Hastings, some historians also dispute the claim that it took place on the site where Battle Abbey, commissioned by William in 1070, now stands and where we plan to finish the first day of this running adventure.

Entering the grounds of Herstmonceux Castle, we take a leap forward 400-odd years – the stunning moated red-brick castle was built in the mid 1440s and later briefly owned by Henry VIII. 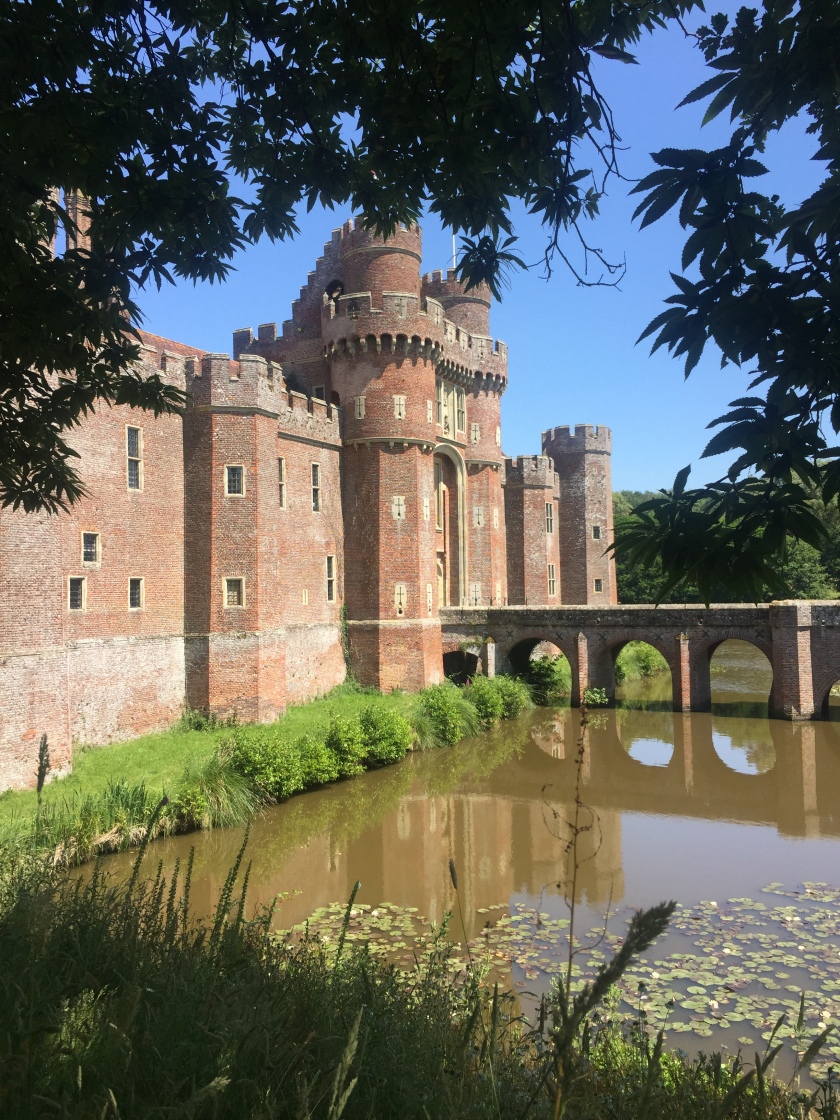 By this time we’re asking ourselves the important question ‘Are there nice places to stop on the way for an energy top-up?’ Feeling that we owe it to our future customers to find out, we sample the cream teas at the castle’s Chestnut tearooms. (And similarly, later in the day, the ales at a quintessentially English pub, The Ash Tree, in the fabulously named Brown Bread Street.) Big ticks all round. 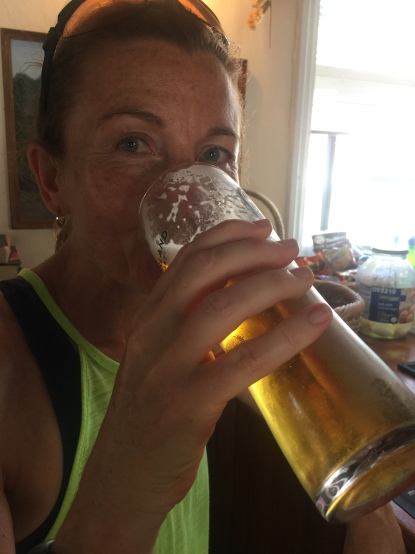 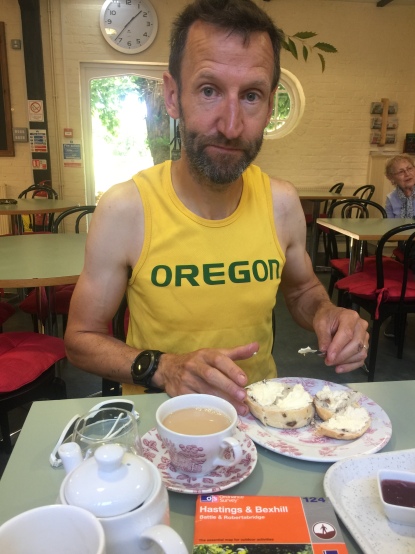 In fact, Jeff credits his pint of Goose Island IPA for getting him up Tent Hill, where William the Conqueror allegedly camped the night before battle. He’d certainly have had a good vantage point from its summit…

But unlike William, we are in no fit state for Battle when we make it there from Pevensey at tea time. We drag our weary selves to The Bull for a hearty dinner and then take a wander around the quiet town. Whether or not King Harold was felled here or not, the place is steeped in history. Just ruins remain of the original abbey, but these and later buildings, like the imposing 14th-century turreted gatehouse, are now in the capable hands of English Heritage and visited by thousands of tourists each year. 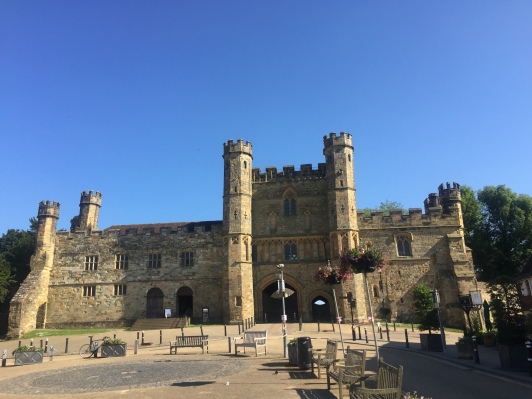 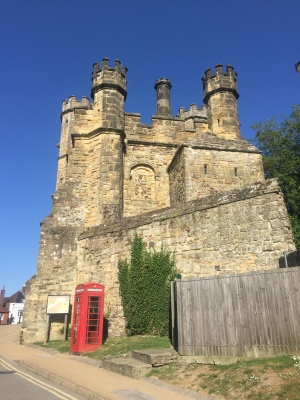 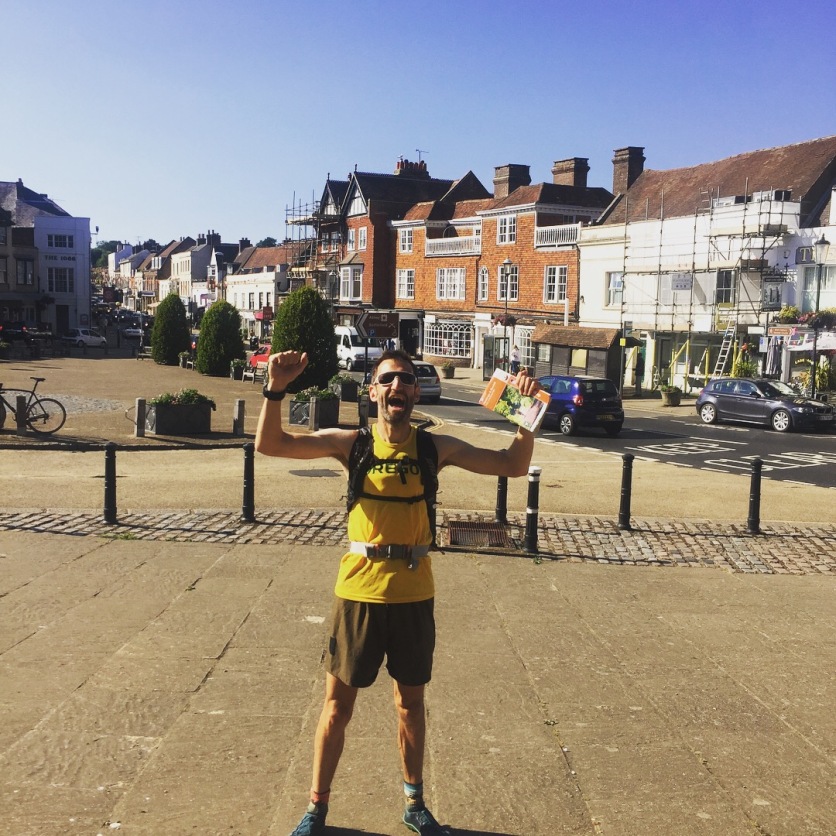 We have 17 miles in the bag as we head to the B&B for much-needed showers and a good night’s sleep.

Day two dawns hot and cloudless. We leave Battle to its Sunday lie-in and set off a little stiffly, weighed down by breakfast and topped-up camelbaks. There are a couple of roads to negotiate, but a mile or so out of town we enter Great Wood, following a wide, easy track between conifer forest and stretches of open heathland.

The route feels hillier today – we climb and drop with a frequency that drives us to devise a ‘walk 10 steps, run 10 steps’ strategy on the steeper slopes to keep ourselves going. From one summit, we catch a glimpse of Hastings in the distance. But mercifully, there are also more forested stretches on the day’s route, which means there’s more escape from the sun than was offered by the vast expanse of the Pevensey Levels. Even so, I’m draining my water supply at an alarming rate, running in this heat. 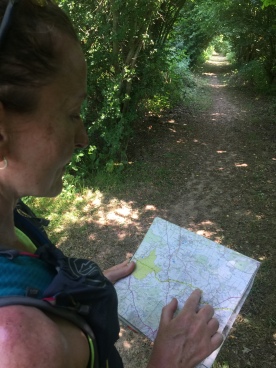 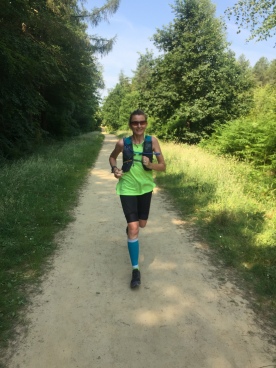 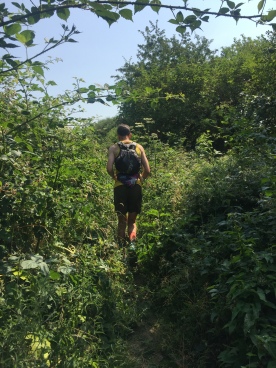 We take a break at Westfield cricket ground, perching on wooden posts under the trees lining the oval to look at the map and eat a handful of nuts, dried fruit and sugary sweets. We decide to press on to Icklesham for lunch – it means more climbing, but will leave less distance to run in the afternoon. Later, when we’re munching doorstep sandwiches in the cool of the bar at the Queen’s Head, we’re glad we did.

If you’ve never combined running and eating (or drinking anything other than an energy drink), you might be concerned about how your digestive system might react to a mid-run meal.  I’ve been pleasantly surprised how well mine has coped, but I certainly wouldn’t want to scoff a sausage roll halfway through a 10K – the reason it works is because the pace is easy. This type of running adventure is about the journey, not the destination… 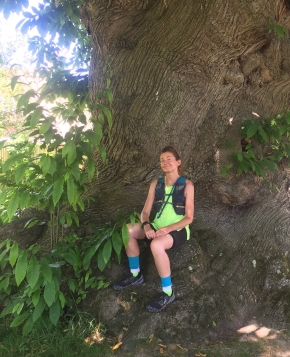 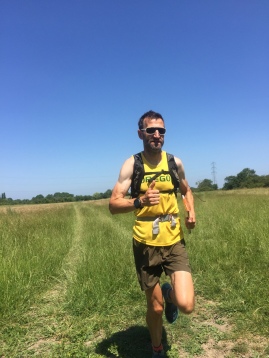 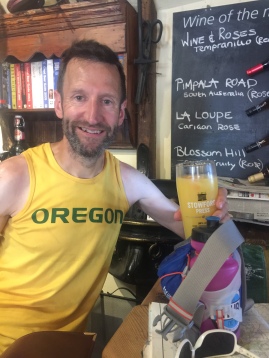 Tummies sated, drinks topped up, we leave Icklesham village through the churchyard (and, accidentally, via someone’s garden) and strike out across high fields from where we get our first glimpse of the sea, shimmering in the heat haze. Sheep wedge themselves into every inch of available shade among the thorny hedgerows that border the fields, and we try not to disturb them as we pass. Then we drop down to a country lane before a stiff climb up and over Hog’s Hill where there is a windmill, reputedly used as a recording studio by Paul McCartney, and from where you can see the ancient towns of Winchelsea and Rye perched on their respective hills.

I say ‘ancient,’ but the Winchelsea that stands today is officially ‘new’ Winchelsea, built by Edward I in 1288 to replace ‘old’ Winchelsea, which was washed away by violent storms. The village and its environs are littered with ruins. First, we spot New Gate, one of four gates into the town built during the 14th century (three remain standing). It’s now surrounded by sloping fields, which we climb, passing the ruined gable end of a medieval almshouse as we join the road into the centre of the village. It’s a pristine English village – not a flower out of place – with a cricket field, a village shop and pub. I half expect to see Miss Marple walking up the street… The grand and partially ruined St Thomas’ Church (built at the same time as the new town) sits at its centre, and in its graveyard you can find Spike Milligan’s grave, with its famous inscription ‘I told you I was ill’. 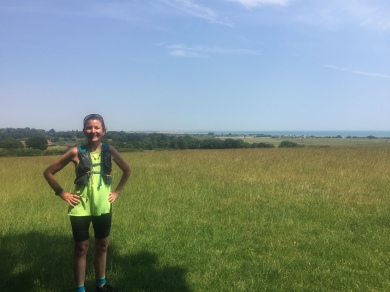 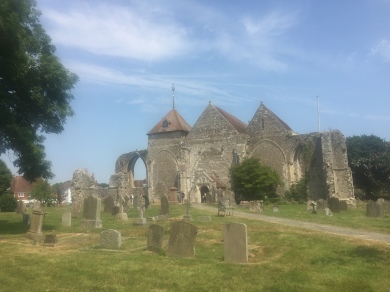 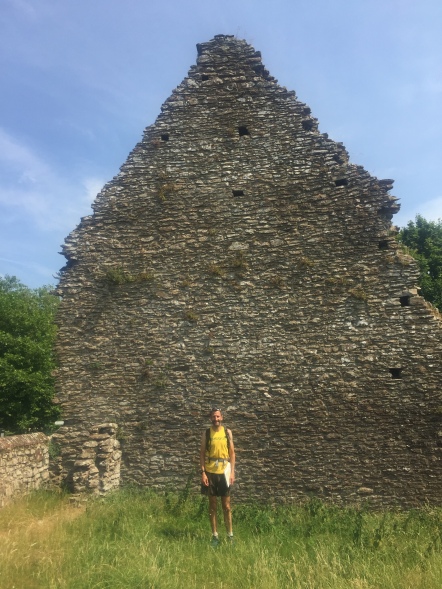 We head west out of the village, looking out across the Brede valley before skipping down the hill (it helps to keep you relaxed, rather than tensing up, Jeff persuades me) and turning back on ourselves, past Winchelsea’s sleepy station and onto the track to Rye. This final part of the route is one that we know well – it’s close to home and we run and walk it regularly. I’d often noticed the red and white plaques along it that mark the 1066 Trail and wondered what it was all about. Two days and 32 miles after leaving Pevensey, I now know. 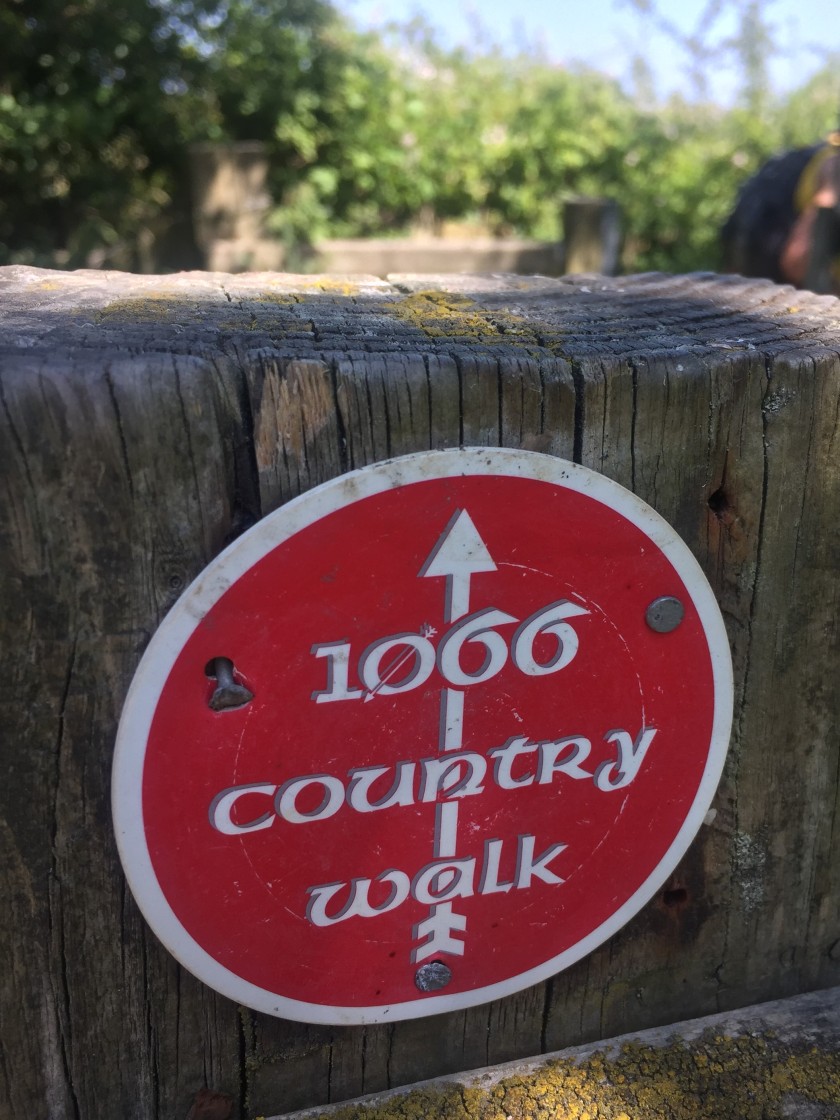 Interested in joining us on a 2-day 1066 Running Adventure this autumn? Email me or keep an eye on the website for details http://www.sam-murphy.co.uk