It’s when the Seven Sisters first appear that the wowing starts. The whiteness of the vertical cliffs, the jaggedy ins-and-outs of the headlands, as if great bites have been taken out of them… It’s breathtaking, literally and figuratively. You puff up each of the seven peaks, thinking bad thoughts about running and scolding yourself for not finding a more relaxing way of spending a day off – until you reach the top, gasp at the view and gallop gleefully down the other side. 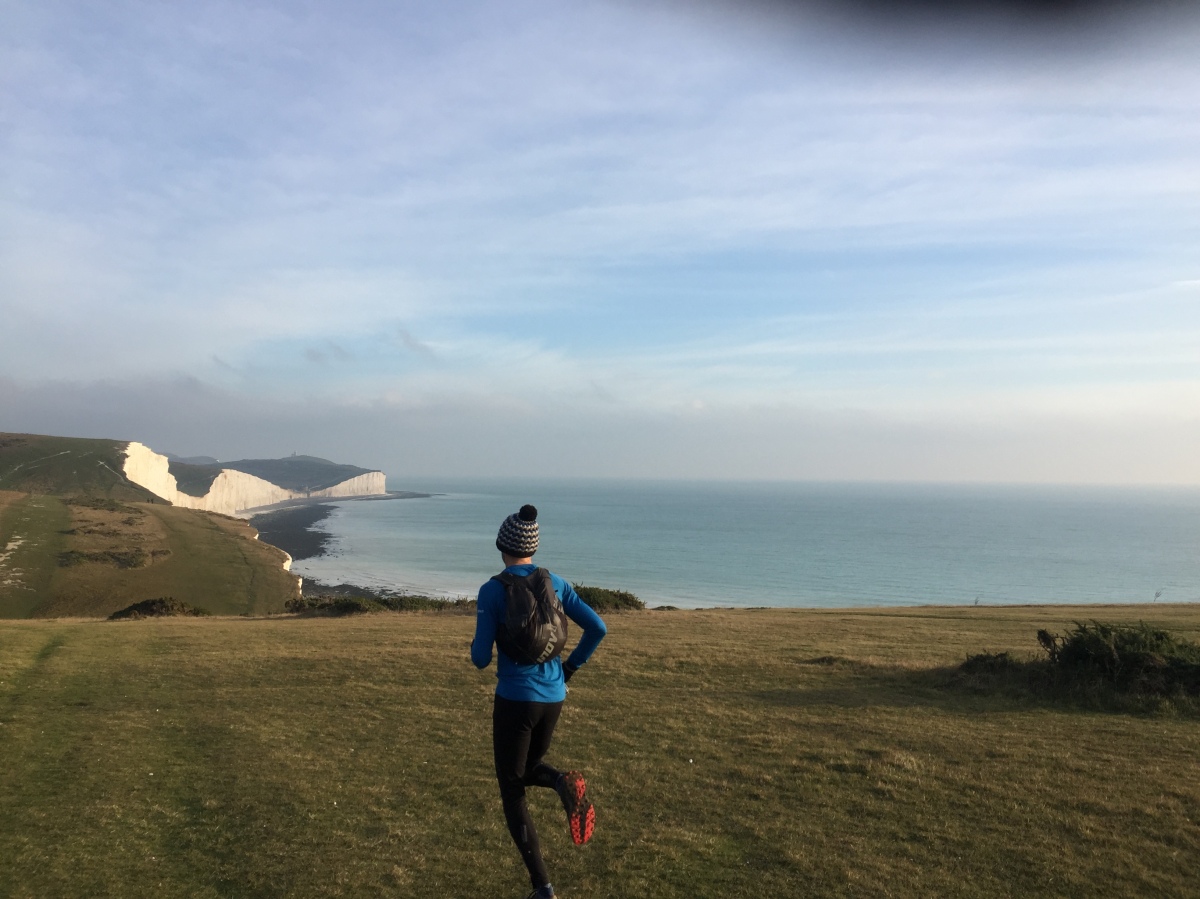 We’re standing at the foot of the South Downs in Eastbourne, where a post marks the start of the 100-mile South Downs Way, which rollercoasters all the way to Winchester.

This hill will be familiar to anyone who’s taken part in or watched the infamous Beachy Head Marathon as it’s the first – and last – thing the runners encounter. Up it goes, at a merciless angle, sending your heart rate into the red before your Garmin’s barely locked on to satellites – and keeping it there for much of the punishingly precipitous race.

But on this particular crisp winter morning, we have something a lot more leisurely planned. A 20-mile loop taking in the villages of Jevington and Alfriston before swooping round to climb the Seven Sisters, pausing for tea and cake at Birling Gap, then scaling Beachy Head and careening back down the hill for home before dusk.

We set off at a jog-walk (aware of the need not to peak too soon) and when we reach the top, look back on Eastbourne laid out in miniature beside a sheet of grey-blue sea. The gorse-clad downs feel springy underfoot and it’s a minefield of shallow rabbit scrapes.

We follow the path inland taking the same northwesterly direction as the race route. With Jeff being a former winner of Beachy Head marathon, I’d assumed I couldn’t be in better company for today’s adventure, but it is soon apparent that my husband is suffering from route amnesia – ‘this next bit’s all flat,’ he says, just as the path takes yet another upward curve before finally descending to Jevington, home to the 300-year old Eight Bells pub and St Andrew’s Church, where the Saxon tower, built of flint and local sandstone, is over 1000 years old.

It’s a bit early for a drink so we press on, winding through Friston Forest to reach a well-groomed path on the roof of the downs, with 360-degree views. Below, the 235ft Long Man of Wilmington is etched on the hillside. 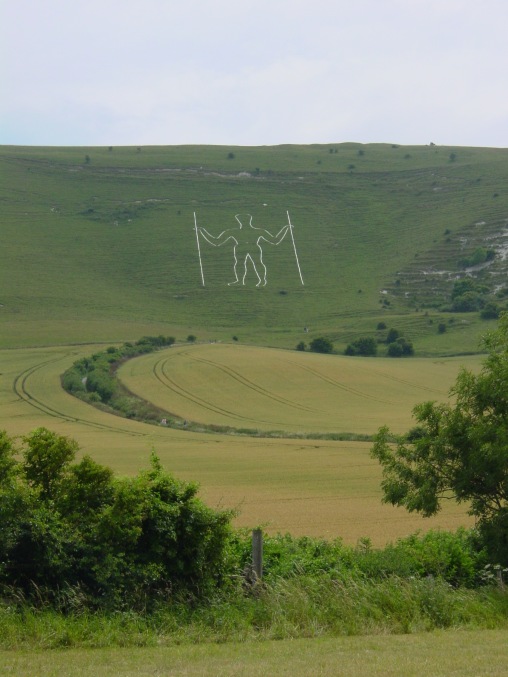 Three or so miles and one tricky descent later, we hit the road and cross the Cuckmere River, following it into the picture-postcard village of Alfriston. It’s definitely time for some sustenance now and we’re spoilt for choice – but the window display of freshly-baked scones in The Singing Kettle wins out. Rested and revived, we retrace our steps back across the bridge, this time heading south towards Litlington before the inevitable climb, which rewards us with views of Cuckmere Haven and the sea.

It’s when the Seven Sisters first appear that the wowing starts. The whiteness of the vertical cliffs, the jaggedy ins-and-outs of the headlands, as if great bites have been taken out of them… It’s breathtaking, literally and figuratively. You puff up each of the seven peaks, thinking bad thoughts about running and scolding yourself for not finding a more relaxing way of spending a day off – until you reach the top, gasp at the view and gallop gleefully down the other side.

When the cottages, car park and decommissioned Belle Tout lighthouse at Birling Gap come into sight, we’re ready for more refuelling – and who can resist a National Trust café? The Gap is one of the few places along this part of the coast that you can actually get down to the beach – via a steep metal staircase. It’s not a day for a dip, but it’s worth the descent to see the chalky cliffs close up. 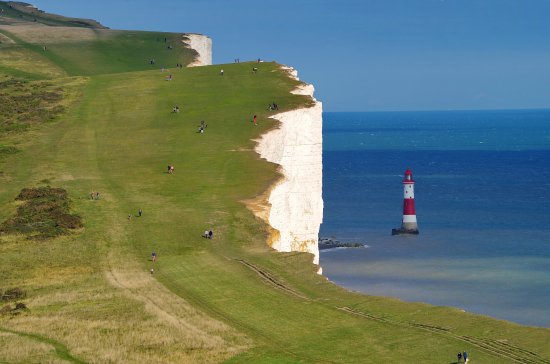 Now it’s ‘just’ Beachy Head to conquer before we fasten our seatbelts for the descent into Eastbourne. This is some climb, but the surface is good – the grass so short, it’s as if it has been trimmed with nail scissors. Below the vivid green downs, the sea swirls around the jaunty red and white striped Beachy Head lighthouse. It’s a wonder the cliff edge isn’t fenced off – at 531 feet, this is the highest chalk sea cliff in Britain – but the views are all the more wondrous for this openness.

By now I’m weary, and as we reach the top of the hill we climbed out of Eastbourne this morning, I marvel at the breakneck speed Jeff – and other Beachy Head marathoners – manage once they get a whiff of the finish line at its foot. I’m quite seriously considering sliding down it on my bottom.

By the time we reach the trail post, we’ve clocked up a tad over 20 miles and the daylight is just beginning to fade. It’s definitely time for that drink now…

Want to come on our Beachy Head Trail Adventure? Our next trip is on Sunday, June 16th 2019, just a few places left.

Details at https://www.facebook.com/wearerunningforever under ‘Events’.