Ever since I first read about The Falls of Glomach in the Cape Wrath Trail guide, I’ve been worrying about this day. It’s one of the highest waterfalls in Britain, with a ‘single leap’ drop of 113m – and we need make our way from the top to the bottom. I’m not great with heights – or descents  – and the guide says: ‘the path can be quite tricky as it hangs onto the west side of the gorge and goes over several awkward rock steps.’ Then: ‘the path takes you down the ravine, precariously over several narrow and rocky sections – take great care, a slip could be dangerous.’ These words have haunted me (I’d somehow even switched the word ‘dangerous’ to ‘fatal’ in my mind) so I’m feeling anxious and yet also relieved the waiting is over as we hike out of Morvich on another beautiful morning. It’s an easy start along a river path before we start to climb up through forest that opens out onto open moorland.

We hear the thundering water of the Falls long before we see them, and stop for a rest and a snack before beginning the descent. It might only be cheese and salami, but it feels like The Last Supper.

The path starts off only mildly alarming – and strangely, heads slightly upwards rather than down as it traverses the side of the ravine. Then we start to descend steeply, with big drops to our right that I dare not look at. The rock steps are the worst bits: here, the narrow path gives way to a series of slick, slippery sheets of rock that we have to clamber over. I can’t imagine ever finding it easy but doing it with my rucksack on is simply terrifying. Once Jeff realises the extent of my fear he is heroic in helping me down, instructing me exactly where to put my feet and relieving me of the walking poles, which are helpful on the path but a hindrance over the rock steps. 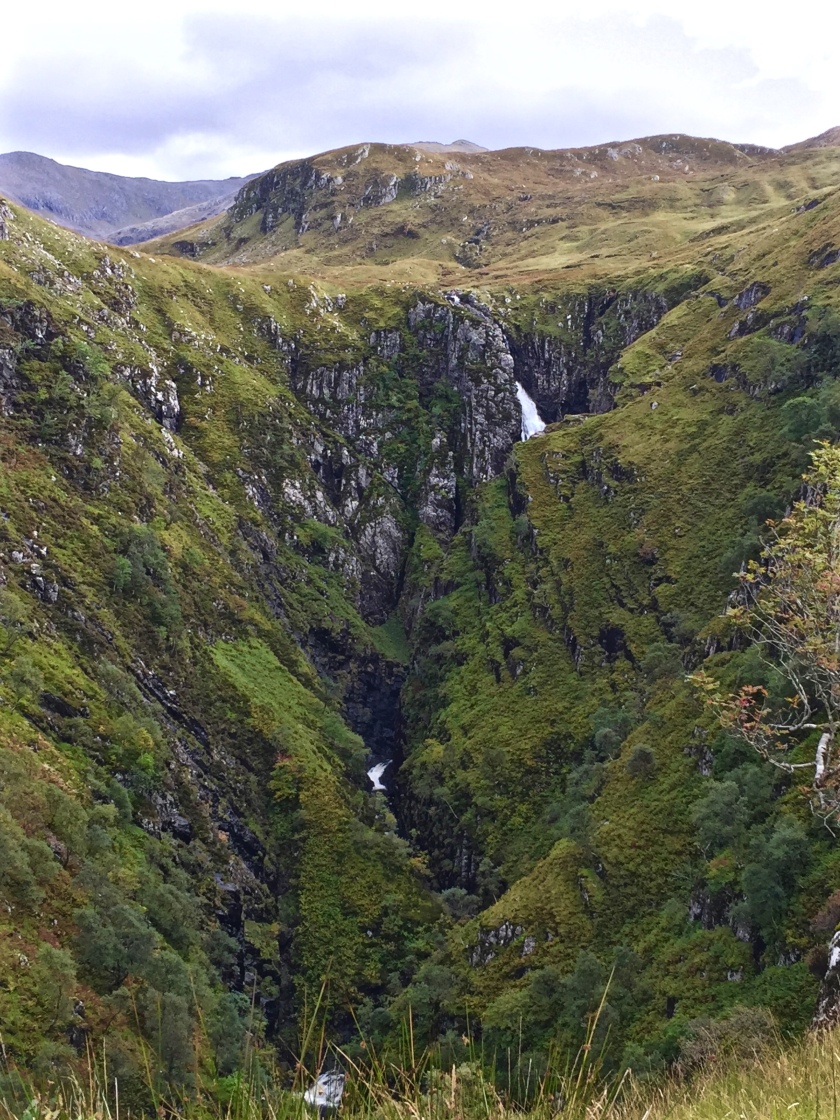 Then all of a sudden, we’re on flat ground, beside a river. I insist we celebrate with a brew and we sit in a lovely sunny spot while I congratulate myself on surviving the descent and declare it wasn’t that bad after all.

But oh, what a mistake I’ve made… Within minutes of setting off from the nice, flat riverside, we find ourselves back at the edge of the ravine on a path that teeters on the edge of the long, steep drop. When we hit the first of a new set of rock steps, I start crying at the injustice of it all and with all my adrenaline spent, progress into a full-scale panic attack. My fear turns me so far away from the edge that I’m actually facing inwards on the path, making futile grabs at clumps of moss and blades of grass growing on the rock for support, which come away in my hand and make me cry harder.

It’s a long and hard ordeal (for both of us!) but finally the path bottoms out at the foot of the gorge and we slog through deep mud alongside the Elchaig river before picking up a wide, easy track. 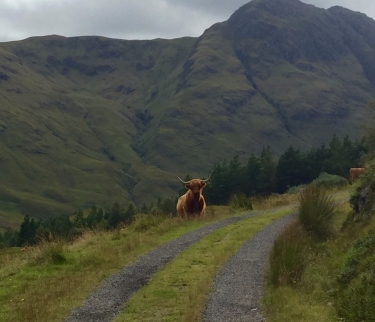 I’m quiet as we walk along, turning the experience over in my head. I’m disappointed in myself for losing control – and for being ‘tricked’ that we’d made it when we barely halfway – but on the other hand, it was as bad as I’d ever imagined it and I did at least make it down alive – carrying my own rucksack the whole way. I allow myself a small pat on the back.

A couple of miles along the track, we find ourselves in such an idyllic setting (near Carnach, east of Loch na Leitreach for any potential CWTers) that we decide to pitch up for the night. We’ve just put our gear down when Morris detects movement in the long grass and pounces, emerging with a shrew in his mouth that he proceeds to devour in about four mouthfuls. So much for idylls.

One thought on “Pride comes before The Falls”