After a summer of camping, we leave East Sussex at the start of September. ‘I’m homeless and jobless,’ I think, as we drive north, the van straining under the weight of kayaks, bikes, wetsuits, hiking gear and an immense amount of reading material. My stomach does a little dip; it’s thrilling, but such wantonness feels naughty, too. When my job was advertised, 140 people applied. Will I live to regret quitting? 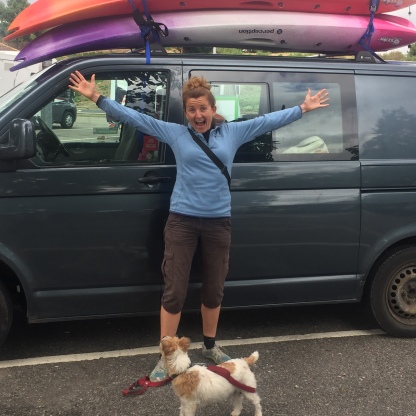 On the other hand, I’ve met lots of people over the last few months who, on hearing our plan, have revealed their own or others’ Crazy Things. Sometimes their plans are already in motion, other times, they’re still at the planning stage – or even just dreaming. My physio tells me about his intention to drive from home to South Africa in a custom-built Land Rover, when the kids are old enough. My hairdresser confides that she’s quitting the salon and moving to Devon to start a new life. Then there’s a couple touring around Europe in a converted horse lorry; a city high flyer who’s jacked it in to become a baker; and the editor of a highly successful magazine who resigned to retrain as a nutritionist. All these stories show that while much of what we do in our lives is aimed at creating stability, striving for success and fitting in, we also have a thirst for adventure, and a need for change too. I reflect on the fact that the change I’ve created for myself has put paid to two of the strongest ways in which I identify myself – as a journalist and as a runner. When we set off on the Cape Wrath Trail in a few days time, I’ll be neither.

3 thoughts on “Hitting the road”